If walls could talk, these celebrity bedrooms would have stories. We’ve rounded up a few of our favorite bedrooms of actors, musicians, and fashionistas. Sure, they are located in some of the most covetable zip codes (with price tags to match), but it’s the stellar design elements that make them A-list. See what it’s really like to wake up like a celebrity, whether it’s Jennifer Aniston or Madonna.

Gisele Bündchen
Gisele Bündchen and Tom Brady’s sleek Manhattan condo features panoramic views, a chef’s kitchen and herringbone-pattern oak floors. The couple paid $40 million for the 3,310 square foot home, but now that they’re renting it, you can sleep in their light-filled bedroom for a mere $40k a month.

Ben McKenzie
Just as the characters he’s played have matured from a wrong-side-of-the-tracks orphan on The O.C. to a crime-fighting detective on Gotham, so has Ben McKenzie’s interior design taste. We love the colorful, laid back vibe of his bedroom.

Robert Pattinson
This Hacienda-style home in the Hollywood Hills was just scooped up by Robert Pattinson for a reported $2.176 million – 20% over asking price! The bedroom’s direct access to the backyard and exposed beam ceiling make it easy to see why Rob splurged!

Iggy Azalea
This Tarzana, CA home was fancy enough for singer Iggy Azalea and her NBA star boyfriend Nick Young. The couple purchased the 6,630 square foot house for $3.45 from Selena Gomez. This bedroom, one of six, features dark hardwood floors, a recessed ceiling, and French doors that lead out to the expansive back yard.

Jason Bateman
The family-friendly updates Jason Bateman made to his West Hollywood home, currently on the market for $2.2 million, have put him on track to earn over $1 million in revenue. The stylish midcentury abode features a large fireplace, a full koi pond, a cozy outdoor living space, and this beautiful outdoor-facing master bedroom.

Neil Patrick Harris
Neil Patrick Harris’s 8,000 square foot Harlem family home features a spacious bedroom with floor-to-ceiling windows. Here’s what it looked like when he moved into the $4 million dollar house earlier this year – the renovations husband David Burtka and he made have have yet to be seen.

James Marsden
The Best of Me actor recently purchased this mid century home in the Hollywood Hills for $1.8 million. We love the floor-to-ceiling windows and minimal aesthetic of the master bedroom.

Vanessa Carlton
Vanessa Carlton’s SoHo loft is the epitome of a cool-girl home. Filled with tons of texture, a mix of eclectic furniture, and exposed brick walls, the Manhattan pad perfects bohemian living.

Anne Hathaway
Recently renovated by interior design and architecture firm David Howell & Company, each room in Anne Hathaway’s loft is filled with high-end details. Her bedroom is complete with epic views of the East River and Manhattan!

Kourtney Kardashian
In Kourtney and Scott’s bedroom, a custom pop-up TV cabinet looks like a piece of eye candy rather than an eyesore. Custom-built cabinets and end tables also serve a special purpose. One cabinet holds outfits that are already put together so that Kourtney can grab and go, while the other holds pieces from the Kardashian Collection.

Pamela Anderson
With contemporary details, a breezy layout, and minimalist decor, it’s hard to believe that this Malibu bedroom is actually owned by Pamela Anderson. With a retractable window opening up to the upper deck, the transition to the outdoors is seamless.

Like sisal rugs, bamboo blinds have a warm honey tone and fibrous texture that makes them an especially great layering piece. To top off her California-girl aesthetic, Whitney piles on pillows and blankets in vibrant colors and patterns.

Kelly Wearstler
Designer Kelly Wearstler’s Malibu retreat blends an art deco elegance with a cool, California essence. In line with her over-the-top design style, her master bedroom has a bold, playful feel. Black and white is anything but boring with graffiti art and textured surfaces. Hilary Swank
Judging by the bedroom alone, it’s clear that Hilary Swank’s former house was fit for a Million Dollar Baby. Aside from ocean views, it featured a balcony and that gorgeous four-poster bed. 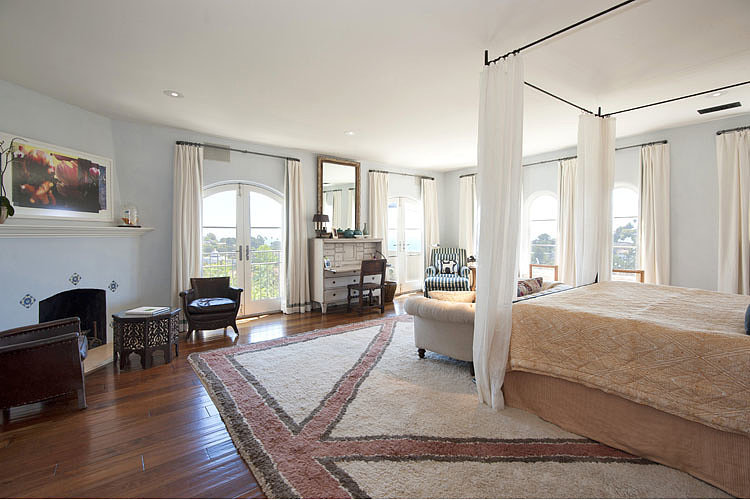 Kimberly Guilfoyle
Can we talk about Kimberly Guilfoyle’s former apartment? Decorated in soft shades like creams and blues, the prewar pad was simply pretty. The bedroom featured custom built-ins, beamed ceilings, and ample closet space. The combination of lucite and crystal details with white bedding and furniture made the room feel airy and feminine.

Jennifer Aniston
To be honest, we wouldn’t expect Jennifer Aniston to go for orange bedding, but it worked. Nothing like her apartment on Friends, her former West Village apartment in NYC was both modern and glam.

Leonardo DiCaprio
After selling his Malibu home for $17.35 million, Leonardo DiCaprio bought this Palm Springs pad for a mere $5.23 million. Designed by famed architect Donald Wexler in 1963, the large master bedroom includes a fireplace and, of course, views of the San Jacinto Mountains.

Kate Moss
Yes, this bedroom used to belong to Kate Moss and Johnny Depp. Located in the West Village, this master suite is complete with a floating tub and a large walk-in closet. But, it will cost you. For a mere $19,000 a month, you can rent this little piece of ’90s history.

Sofia Coppola
Nothing was lost in translation when it came to Sofia Coppola’s Nolita loft. Blackout curtains in a soft shade provided a practical way to block the city views, and a flokati rug kept the space soft and warm. 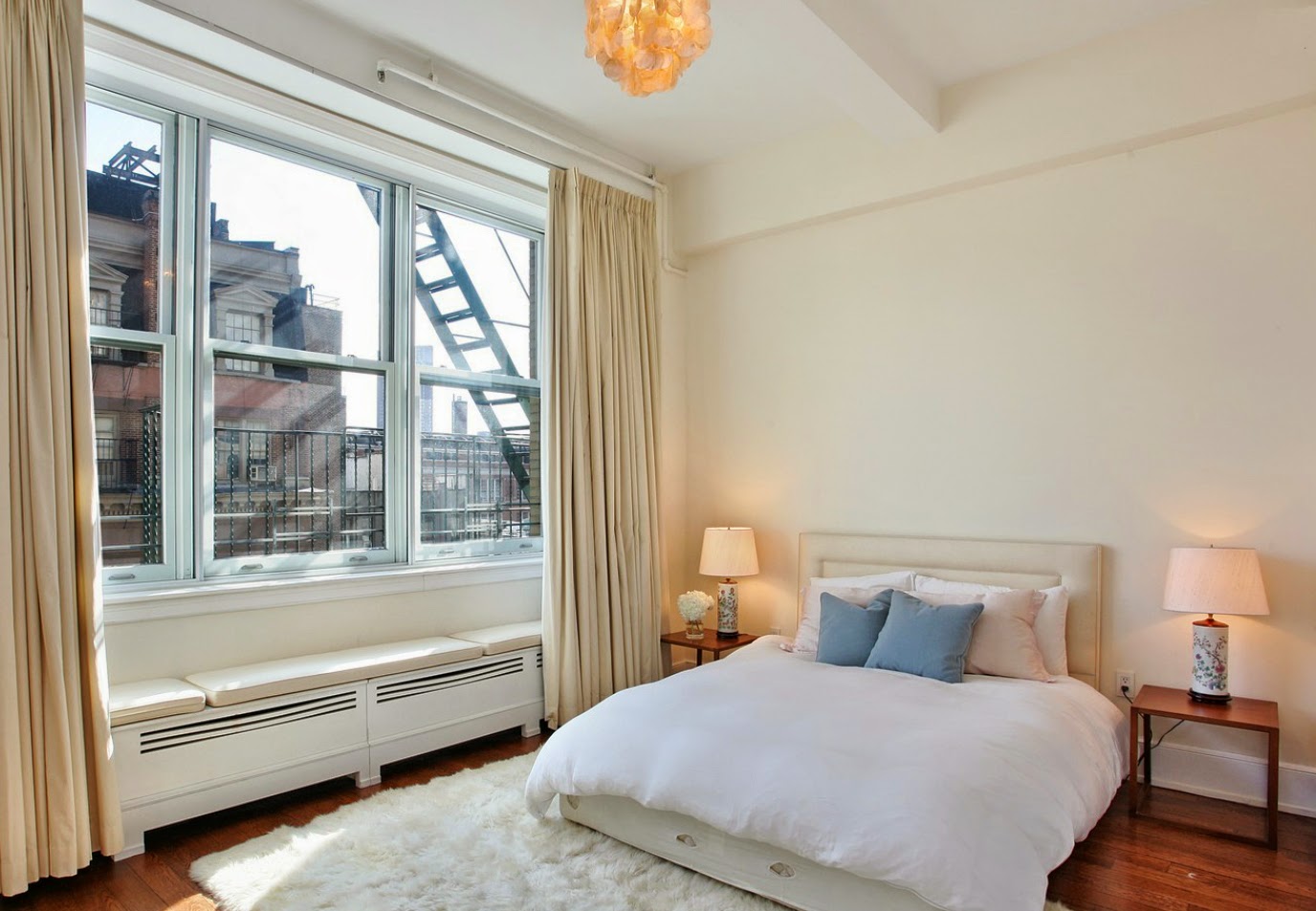 Jenna Lyons
In our book, Jenna Lyons is a celebrity and had the bedroom to prove it. As the president and creative director at J.Crew, we’d expect nothing less of her former Brooklyn town house. Way ahead of 2014’s black wall trend, her bedroom was the epitome of chic.